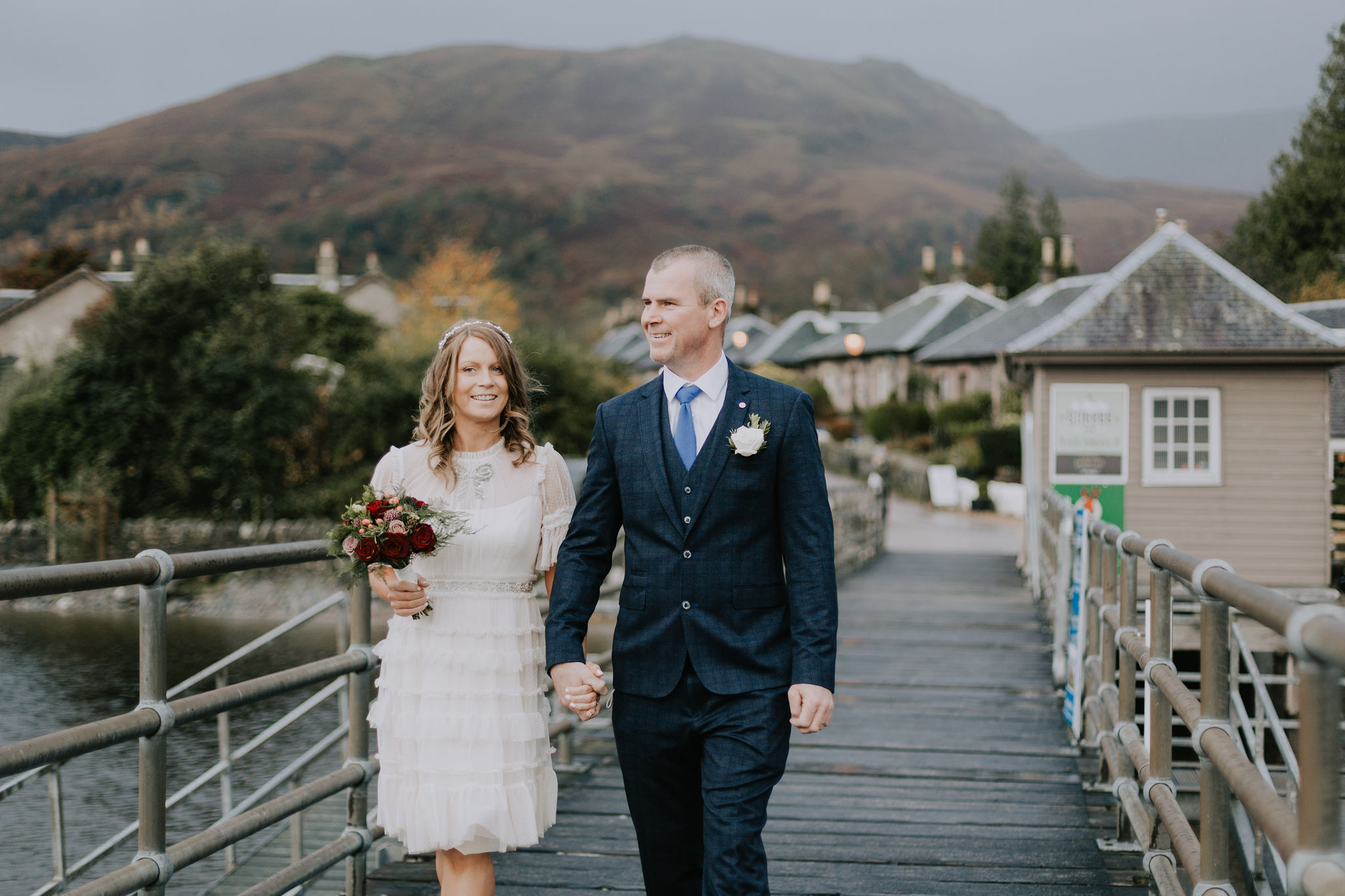 As a wedding film maker/videographer I’d like to talk to you about Scottish Elopements and, in particular, I’ll talk about the one I filmed last week.

Scotland is one of the most, if not THE most, popular location for eloping couples. The choice of jaw-dropping, awe-inspiring scenery for the backdrop is mind-blowing.

From Loch Lomond & The Trossachs to Glencoe to Skye, but to name a few, you will find countless breath-taking locations to tie the knot.

Last week, Michelle & Aidan arrived at The Lodge On Loch Lomond from Ireland. It was a secret so no-one back home knew apart from their childminder.  They had come to Scotland to elope and I was asked to film their elopement ceremony.

Capturing the wedding alongside me was the fantastic Olesja from In The Name of Love Photography, side note: I gave her a lift since we live near each other.  I’ve used one of her photos as the Featured Image so all copyright and credit belongs to Olesja. Check out her website for some more amazing photos!

We arrived to a very autumnal setting with a low cloud layer covering Ben Lomond and the Conic Hill on the opposite side of the Loch, of course there was some rain, it’s late October in Scotland after all, but that just adds to the mood.

The ceremony was conducted by Jane MacGregor from Argyle & Bute Registrars and it was lovely. Had the rain stayed away then we could have had the ceremony outside but it was more of a day for an inside ceremony.  After the exchanging of vows and rings, Michelle and Aidan sealed their marriage with the Celtic tradition of drinking from the quaich. The “loving cup” was filled with a dram of whisky and the couple took it in turn to take a sip.  You’ll have to wait for the main film to see the funny expressions I’m afraid 🙂

After the ceremony we had a photo session on the beach and grounds of the Lodge as well as some photos and filming at Luss Pier. Unfortunately we had to cut that short as the rain was a bit too heavy.

We left the newly weds to go and enjoy their first meal as husband and wife and we headed back to Glasgow. In true Scottish weather style, the sun broke through the clouds and lit up the sky as we passed Glasgow Airport. Typical!

This is the Elopement Teaser which launched on the 1st November – if you’d like to know more about elopement wedding films then please get in touch.

As a result of the covid-19 pandemic restrictions impacting weddings, we have seen a rise in the number of secret weddings, elopements and micro weddings.  Personally, I’m not a fan of the term “Micro Wedding” or “Intimate Wedding”, they don’t really sit right when trying to explain what it really is.

To couples, they are having to massively rethink their plans, cut their numbers, move dates, move venues, alter their budgets, book/cancel/rebook suppliers. What a fricken headache and I totally empathise with them, I’d hate to be going through all this emotional upheaval.

So what’s the difference between them?

In Scotland, a “micro wedding” is one which has 20 people or less*, that includes you and potentially some suppliers, photographers and videographers for example whereas an “intimate” or “small wedding” may have 20-50 guests* – this is not a hard and fast rule but more like guidance. We will always have to follow the rules on numbers until such times as we get rid of this pesky virus, whenever that may be.

The hardest part is deciding what to do. Do you downsize your wedding, inviting only a select few so you can still marry the one you love? Do you wait until restrictions have changed, allowing more people to attend? Do you just the two of you and a couple of close pals elope and then have a party when you get back?

Truth is, I have no idea, not a clue, it’s really up to how you want it all to be…

I have, where possible, been as supportive, understanding and flexible as possible for those couples who have had to move their dates. For me it’s just a case of updating my Client system with the new information, another reason I’ve not charged a rescheduling fee. You guys have enough on your plate as it is!

Small weddings are now the “norm” due to the restrictions in numbers but don’t be concerned if you are worried that having a videographer/filmmaker will take up one of your numbers. I can still film your wedding, no matter how much it has changed, we just have to be smart on how we do it.  Some of the weddings I’ve filmed since Lockdown have meant that during the ceremony I’ve set up all the cameras and then moved away to a “safe” distance meaning I am no longer part of the numbers. The result? You still get one of the most important parts filmed.

If you head to the Packages section you can find out more information on all the options you have available. Alternatively, drop me an email – hello@nine18films.co.uk

*this number may vary from region to region, depending on the localised lockdown restrictions so make sure you check ahead of your wedding.

Until next time… stay awesome!

This site uses Akismet to reduce spam. Learn how your comment data is processed.

Any cookies that may not be particularly necessary for the website to function and is used specifically to collect user personal data via analytics, ads, other embedded contents are termed as non-necessary cookies. It is mandatory to procure user consent prior to running these cookies on your website.